Get in on this viral marvel and start spreading that buzz! Buzzy was made for all up and coming modern publishers & magazines!

Subscribe to our Weekly Newsletter to get the financial news you need to know about.

Do you wany free money to invest?

If you sign up using this link, Wealthsimple will give you a $25 cash bonus and commission-free trades. In turn, we get $25 to run Btchcoin.

That’s what we call #makingmoneymove.

Inflation, the Loonie’s rise, and what’s next for Canadian economy post-pandemic…

The loonie is on the up and up and inflation has been buzzing through the financial markets this week, putting a lot of people on edge. While USD-CAD parity is great for online shopping and travel (post-Covid, obvi), it can have implications that ripple through all areas of the economy.

To put it into perspective, the last time the loonie was this high One Direction was still together and Pizza Rat was trending. So, what’s the deal?

What does that mean?

As countries begin the shift to ‘life after COVID’, demand for goods is rising, pushing the price up, while delays and shortages hurt supply. Things like flights, clothing, and food, have all begun to rise in price after months of decreased demand. The rapid increase in price, combined with stagnant wages and supply constraints, has caused economists to worry about inflation.

Canada’s economy is closely tied to the US, so it’s only natural that the announcement rocked the Canadian financial markets, which is why you may have noticed your investment account take a tumble this week. It’s been a rollercoaster week for the markets and is likely to get bumpier.

Why is the Canadian dollar so well?
Currency is complicated which means there are a lot of factors that can impact it. For starters, the rise in prices for things like lumber, oil, due to COVID-related supply chain strains, plus record breaking prices for wheat and copper have been positive for Canada. “These are things Canada produces, and therefore higher prices generate income here in Canada, this is better for the economy,” Stephen Poloz, former Bank of Canada governor, told CTV News.

The Bank of Canada also recently changed its guidance to show it could start raising its target interest rate from historical lows of 0.25% in late 2022.

It also became the first major central bank to cut back on bond purchases aka pandemic-era money-printing stimulus programs.

TL;DR: The above explains inflation.

…RIP to our crypto accounts this week.

Elon Musk has long been crypto’s biggest promoter — he single handedly turned a meme coin into a cryptocurrency (*cough* *dogecoin*). This past week though, he announced that Tesla will no longer accept Bitcoin as a form of payment. Musk’s tweet read that while cryptocurrency is a “good idea,” it cannot come at a great cost to the environment.

One single tweet sent ripples through the crypto market and wiped out roughly $6.1 billion in value from companies connected to the digital asset world. 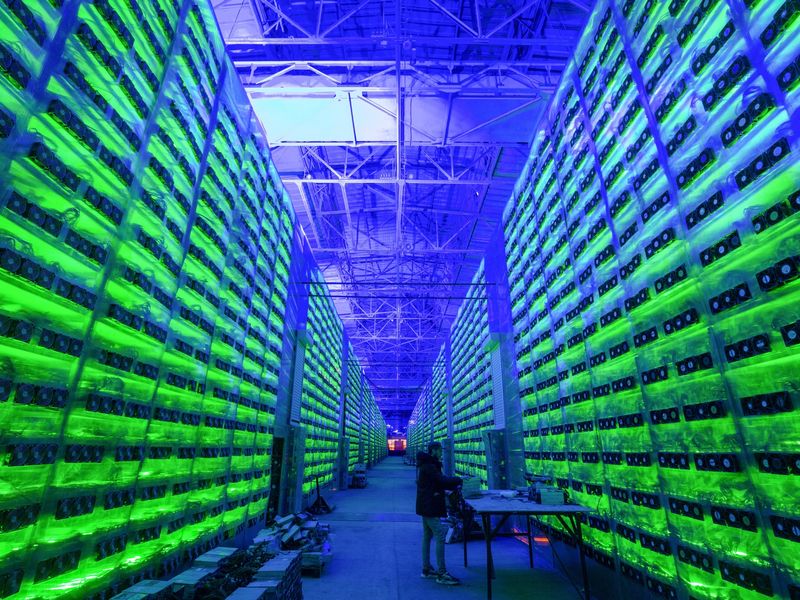 How does crypto use energy?

Each bitcoin transaction has to be verified by solving complex computational problems. This process is called mining (see image on right) and is a necessary step to keep the system secure and decentralized. The one caveat is that mining uses tremendous amounts of energy — almost equivalent to that used by a small country like Singapore!

How bad is Bitcoin’s energy consumption?

To be precise, a single bitcoin transaction uses 707 KWh which is roughly equivalent to the amount of electricity a Canadian house consumes in a month! To make things worse, much of this electricity is derived from coal.

The crypto market is at a crossroads. As coin-trading gets more popular, crypto investors and businesses can no longer ignore the market’s carbon footprint. This new awakening could lead investors to reevaluate their crypto portfolios and direct their funds to sustainable alternatives. TL;;DR: Environmentalists-1 miners-0.

That’s all from Btchcoin on bitcoin — at least until the next Elon Musk tweet.

And you thought we were done with pipeline drama…

During a virtual event on Thursday, Michigan Governor Gretchen Whitmer said she hopes the Biden administration will join her fight against Enbridge to shut down its Line 5 pipeline.

What does that mean?
Line 5 carries oil and gas from Alberta to the U.S. and Canada. Whitmer ordered Enbridge to close Line 5 by May 12 after revoking a state easement for the pipeline last November due to environmental concerns.

Enbridge, however, has opposed the shutdown of the pipeline. Enbridge spokesman Jesse Semko, in a statement to iPolitics, said that pipeline operations will not stop “unless we are ordered by a court or our regulator to do so, which we [Enbridge] view as highly unlikely.”

Semko goes on to say that “Line 5 is operating safely, reliably, and is in compliance with the law.”

What’s Canada saying?
The Canadian government joined attorneys general of Ohio and Louisiana, and chambers of commerce in Canada and the U.S., in filing an object with the court on Tuesday.

Natural Resources Minister Seamus O’Regan said Thursday during question period in the House of Commons that line 5 is a critical energy link. “This is a full-court press by Team Canada, with support from industry and labour,” said O’Regan.

The Line 5 dispute has sparked fear in Sarnia, Ontario where thousands of jobs depend on the pipeline for many generations. If the pipeline shuts down, many will have to leave the city to find work elsewhere. In an interview to CTV News, Ashley Durley, a single mother and pipefitter, said that her family has lived in Sarnia and relied on Line 5 for generations. When asked if the pipeline was halted, she said that it was “very stressful, [she is] very worried. I don’t honestly know what I would do.”

Things we read and liked:

Can’t get past this NYT headline; “Are Animated Dads Getting Hotter?”

With all Greyhound routes cancelled (RIP), do we need a national bus service??

This article on how Jeff Bezos outmaneuvered the tabloids.

For your Monday inspiration: this video of Mariah getting her vaccine.

ICYMI: We got acquired! More deets to come, but to learn more about who bought us, check out this Guardian article.

Btchcoin News is entirely run by young women who are passionate about making financial news more accessible to our community.

Consider supporting Btchcoin by buying us a coffee, or contributing on a monthly basis.

Let’s talk about $10 a day childcare…

You don't have permission to register